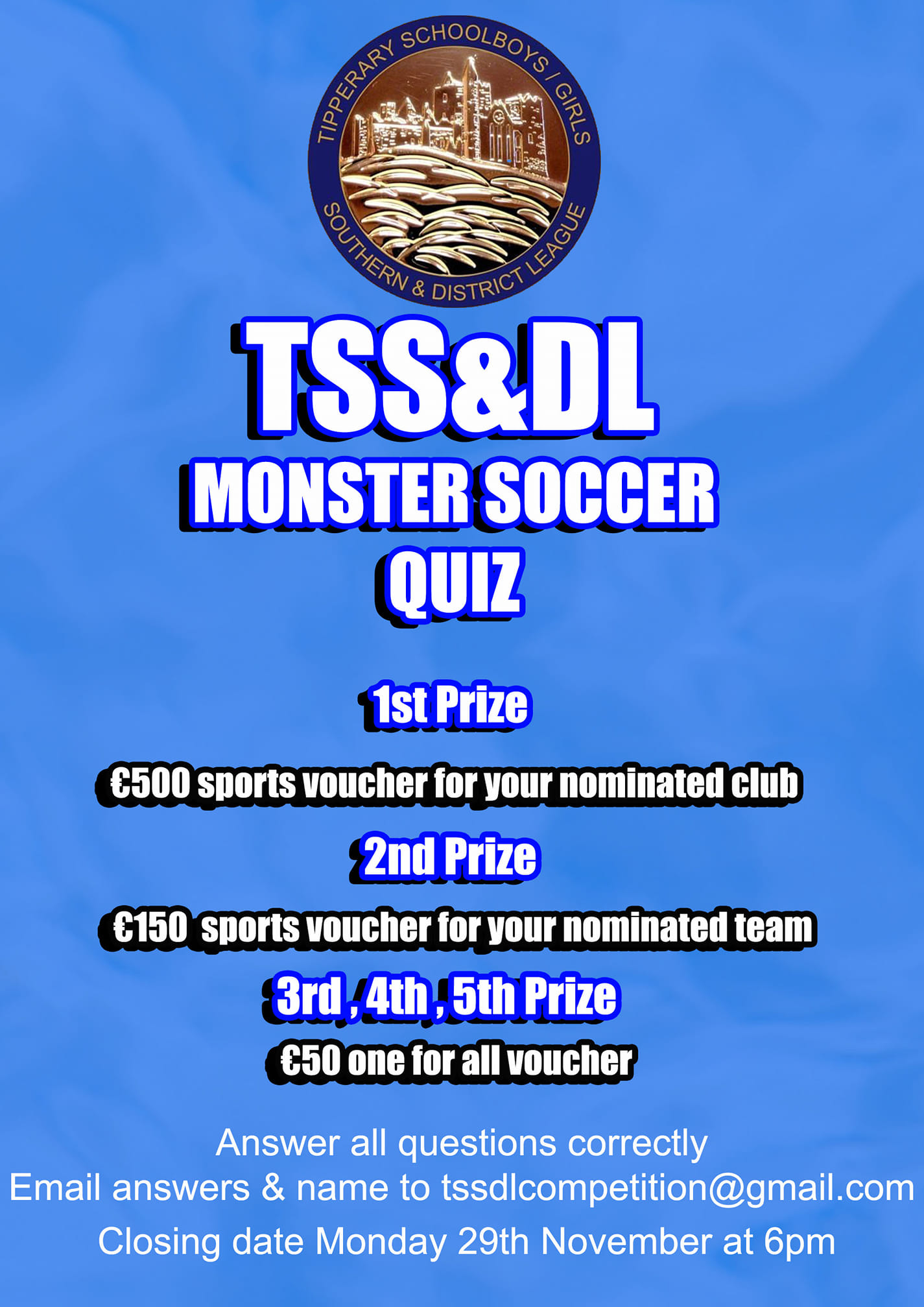 The TSS&DL Monster Quiz Simply answer all questions correctly and email to tssdlcompetiton@gmail.com along with your name nominated Team and Club. The nominated Team and Club MUST be registered with the TSS&DL in the 2020 season. open to all ages closing date 29th November @6pm only correct entry’s will be entered. The draw will take place Live on the TSS&DL facebook page on Monday 30th November @ 8pm. The questions are for all abilities with some very easy moving to hard the more you enter the more chances you have of winning some great prizes. Only entries sent by email will be entered.
Prizes
1st 500 euro Balon Sports Voucher for nominated Club
2nd 150 euro Balon Sports Voucher for nominated Team
3rd, 4th and 5th 3 individual 50 euro One for All Vouchers
Q1: What do the letters TSS&DL stand for
Q2: The Cremins family have had a long association with the TSS&DL however how many times has the DD Cremins Tournament been PLAYED
Q3: Name the Club who play their games at the Tower Grounds
Q4: How many players are on the field of play at the start of an u12 game
Q5: What do the letters VAR stand for
Q6: Can you name the Club that has a pitch that shares it’s name with a famous 1980’s Doll
Q7: True or False you can make more than 5 subs in a Schoolboys/Schoolgirls game
Q8: What weighted football is used in U10 games
Q9: Referees are an integral part of the game however what do the letters ISRS stand for
Q10: This Club has a former Cricket Club House on its grounds can you name the Club
Q11: What year did the Republic of Ireland reach it’s first major Tournament
Q12: Name the stadium that Ireland beat Italy in the 1994 World Cup
Q13: What number was Ray Houghton wearing when he scored against England in the 1988 European Championship
Q14: The fastest goal scored in Premier League history came in 7.69 seconds can you name the player.
Q15: Mestalla is the home stadium of which Spanish Club
Q16: The Republic of Ireland Senior Women’s team play their home games at this stadium can you name it
Q17: How many Clubs are members of the TSS&DL
Q18 Name the Club that were crowned 2020 SSE Airtricity Champions
Q19: What year did the Aviva Stadium Open
Q20: How many clubs registered with the TSS&DL have the word Celtic in their name
Q21: Can you name the club that won the 2019 U16 SFAI Southeast Regional Final
Q22: Can you name the Romanian player that missed the penalty against Ireland in the 1990 World Cup
Q23: How many square yards are in a full size pitch’s penalty area
Q24: What year did the Premier League Start
Q25: Who received the first red card in the Premier League era
Q26: Name the only football club to sack Sir Alex Ferguson as a manager
Q27: He was born in Kingston Jamaica in December 1994. At the age of 5 he immigrated to London and ended up playing for the QPR youth team before joining Liverpool can you name the player.
Q28: This club often plays its schoolboys games in Keating’s Field can you name the club
Q29: Liverpool won their first Premier League title in 30 years in 2019/2020 who scored their first goal of the season
Q30: Who scored the first Premier League hat-trick and against who
Q31: Where was the first World Cup played and who won it
Q32: What car manufacturer sponsored this year’s (postponed) Gaynor Cup TSS&DL Kit
Q33: Name the only player to have scored in the Premier League, Championship, League 1, League 2, Conference, FA Cup, League Cup, Football League Trophy, FA Trophy, Champions League, Europa League, Scottish Premier League, Scottish Cup and Scottish League Cup.
Q34: Who is the only player to have won silverware with both Manchester UTD and Liverpool
Q35: Can you name Stephanie Roche’s first professional Club
Q36: How many representative teams had the TSS&DL have in 2019/2020 season
Q37: What are the dimensions of a Goal post at U12 age groups
Q38: Stephanie Roche was nominated for a major award in 2014 and made the last 3 can you name the other 2 nominees and the award
Q39: Name the Club at this location 52.360530,-7.707010
Q40: Can you name the 5 SFAI Southeast Regional Trophies